The PhytoVegSpec is an adjustable spectrum that can be optimized for both the grow and flowering stage.
Were most suppliers opt for a single fixed spectrum and therefore have to make a compromise between the ideal growth and flowering spectra, the PhytoVegSpec adjustable spectrum is constructed in such a way that ideal spectra can be constructed for specific stages in the plant growth.

TESTS CARRIED OUT BY UNIVERSITIES AND RESEARCH INSTITUTES TO DETERMINE THE IDEAL SPECTRUM, HAVE SO FAR ALWAYS BEEN DONE OVER THE ENTIRE GROWTH STAGE.

The fixed spectra determined by many suppliers are therefore determined on the basis of limited information and will not make the most of the possibilities that are possible with separate spectra in different growth phases.

Systems are often offered as "variable spectrum". In these systems, they allow the user to add just a little bit of blue and red. Despite the fact that this spectrum is technically variable, the effect of this on the plant is minimal. The PhytoVegSpec spectrum is contstructed in such a way that it has a major effect on the growth of the plant.

The blue part is important for the production of the roots and stems of the plant. The red is the most efficiently absorbed part of the electromagnetic spectrum and is ideal for the production of flowers.
Blue and red are opposites when int comes to plant elongation, where blue shortens internodes and red lengthens them.

The PPF (Photosynthetic Photon Flux) is the amount of photons that fall within the PAR range which are received by the crop within a certain time period, expressed in Umol/s/W, or how efficiently the amount of photons within the PAR range are delivered per Watt consumed. Until recently, the idea was that all light that contributed to photosynthesis in the electromagnetic spectrum ranged from 400 to 700nm along the McCree curve. the 400-700nm region is also known as the PAR (Plant Active Radiation) region.
Now we know the wavelengths that fall outside this range do have an effect on the morphology and steering mechanisms of the plant but to a lesser extent on photosynthesis (see image). In fact, it spans the range from 300nm to 800nm, but due to the decreasing response in the 300-400nm and 700-800nm regions, and the fact that it was not possible at the time to produce sensors that followed this decreasing curve, they simplified the PAR region to be rectangular. 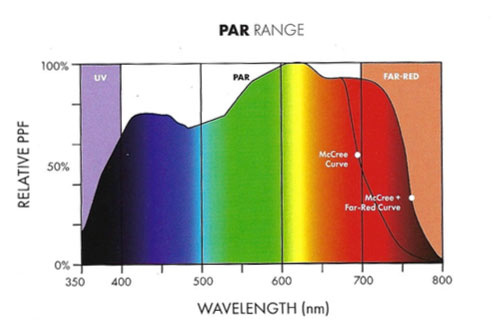 The latest insights show that the McCree Curve is not complete.

McCree determined the curve with the limited resources available at the time. He did this by shining pure colors on different plants using a light bulb and a prism. At the time, he calculated the influence of individual colors on photosynthesis by means of a photosynthesis measurement.

According to new insights, the wavelengths in the red PAR region 600-700nm contribute to photosysntesia to an equal or even greater extent than we applied individually. It has also been found that if the individual wavelengths are presented as a whole to the plant instead of a single leaf and for longer periods with higher intensity, it appears that the McCree curve will look very different. The curve should therefore be redefined taking into account recent insights.

With this new knowledge, it is better to look longer at the limited and outdated PPF or PPE 400-700nm for the power of a light source for growing, but at the PPF Total and PPE Total (350-800nm), as these also contain the photons of UV and NIR. PPF Toal, is also called Photo-biologic Photon Flux (PBF)

The integration of a color IPS screen and the PhytoVegSpec makes the Extreme Series unique and special. What's special about it is that the spectra and the B:R ratio are displayed very accurately on the display. Using this information, light recipes can be exchanged between growers and companies using data that can be made transparent are the separate Blue, Green and Red percentages, B:R ratio, PPF, PPFD, DLI, Wattage, percentage of emitted light, plant temperature and air temperature.

BUILD IN OR EXTERNAL CONTROL

The fixture can work completely independently and even serve as a master in a group of fixtures. They can also be controlled by external devices such as the Maxi controller or 3rd party controllers. Because the fixture can be updated via Wi-Fi, it's possible to work according to the latest insights with regard to light strategy and to supplement the spectrum by adding Add-on fixtures.

The driver that control the LED's are invisibly integrated into the frame of the fixture. Because high voltage drivers have been used, the efficiency is particularly high and therefore there is less heat loss. This lower heat loss makes it possible to integrate the drivers invisibly into the frame.

The tilted bars are designed to provide the ideal balance between light penetration and uniformity. At the recommended height relative to the crop, a uniformity higher than 95% can be achieved when using multiple fixtures. Because the light from the lenses is focused, less scattered light is lost to walls and paths.

The patented Ultra high transmittance lens is internally shaped in such a way that light rays which normally reflect back to the LED (converted back into heat) now end up just next to the LED and get reflected.

Our fixtures have unique auxiliary lighting that is channeled through the integrated light-pipe lens design. The auxiliary lights consist of full-color LED's, and serve as additional lightning, alarm indication, plant temperature indicator, or night lighting, depending on the situation.

The Extreme series has 3 Smart Ports available. These are universal communication ports that have a variety of connection options, from a wide range of sensors such as Plant Temperature, Air Temperature, CO2, and Humidity, to devices to control the climate.
Communication can be both analog and digital via the Smart Protocol. It is possible to control up to 160 fixtures via analog communication and > 1000 pieces via the Smart Protocol.

The built-in Doppler radar sensor can detect movements up to 3 meters away. This sensor is used, for example, to activate the screen and to automatically activate the (green) auxiliary lighting at night. The intensity and color of the auxiliary lighting can be adjusted such that the room entered at night without disturbing the night rhythm of the crop. Because the night lighting is only switched on when there is movement, it will not unnecessarily illuminate parts where it is nog needed. The night lightning can be set to different intensities and colors, such as blue, which appears to hav less effect on the sleep rhythm than green light, but which human vision is less sensitive to. The sensor will also be used to automatically switch off the UV when using het Add-on fixtures, in order to prevent damage to the eyes and skin.

An Add-on fixture will also be released in the near future that will add extra far-red. With these Add-on fixtures, completely independent control of far-red and even UV is possible.